With Hotline running on the NetEnt software, you get to hop on an adventurous journey packed with lavish cars, fast rides, and awesome winning opportunities. This amazing NetEnt release paying a tribute to those hot Miami 80’s scenes brings back those awesome retro memories packed with a collection of unique features, a superb design, appealing visuals and truly rewarding bonus features which once triggered can bring rewarding payouts your way in just several spins of the reels. The game comes packed with 5 reels and 30 paylines with all game’s elements nicely crafted bringing a unique, truly immersive both desktop and mobile gaming experience your way with the very first spin of the reels. 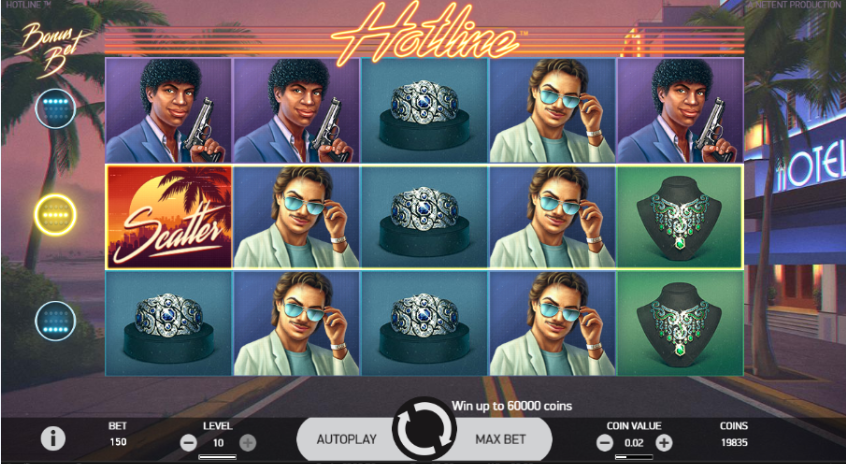 As you hop on this journey with Hotline, you get to travel back in time back to the 80’s joining two detectives looking very much alike Crockett and Tubbs on their ultimate Miami adventure. The game, in fact, is inspired by Miami Vice and similar TV shows with the reels nicely set depicting Miami streets lit in the sunset. The game’s reels are also packed with neatly crafted retro symbols such as cops with guns, a classy lady, and other typical characters of this era. As you travel back in time with Hotline, you will also enjoy the game’s neon signs and palm tree also depicted in the distance. This amazing appearance of the game is nicely complemented by great 80’s pop-rock, electronic tunes which play in the background adding more to the overall mood you get during the gameplay.

When it comes to the Hotline bonus features, this retro adventure you are about to hop on comes packed with rewarding bonuses such as the game’s Bonus Bet feature, plenty of Re-Spins, and much more. The cop-themed game is also packed with rewarding bonus symbols such as Expanding Wild symbols and Sticky Wilds. Besides enjoying Re-Spins, with Hotline, you also get to enjoy plenty of Free Spins which will be coming your way. During your Hotline gameplay, you should definitely pay attention to the game’s Wild symbol represented by the Red Ferrari which can help you score more winning combinations due to its power of replacing for those regular symbols on the reels.

The game definitely has that 80’s retro vibe incorporated which is clearly visible in every single Hotline element, from its nicely crafted symbols to its awesome soundtrack which also accompanies you on this journey. However, what makes this game worth your attention is definitely its bonus features which once triggered can help you significantly boost your bankroll within just several spins of the reels. One of the main attractions of the game is its Hotline bonus mode in which one particular line is lit in yellow light on the left side of the reels. When you lit this line, you are paying extra, but you also get to enjoy more generous winnings scored on this line. You can select up to three lines.

This mode is very useful as those Wild symbols which appear on these lit lines turn into Expanding Wild symbols which fill all positions upon the reels they landed while awarding you one Re-Spin. This NetEnt release also comes packed with another lucrative bonus mode, the game’s Free Spins bonus which is triggered as soon as you land three or more of those Scattered Sunset symbols in any position on reels one, three or five. Once you get there, you are immediately awarded 7 Free Spins. Moreover, during this Hotline bonus mode, those Wild symbols which land on the reels turn into Sticky Wilds which remain locked in their place for the duration of this mode. 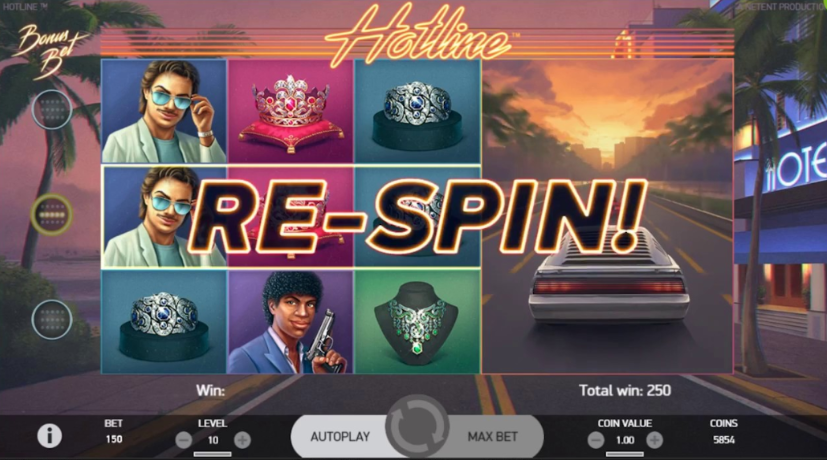 With these amazingly lucrative Hotline bonus features, you can score an amazing payout of 400x your stake in just one single spin of the reels. The game is medium variance suitable for both high rollers and beginner players who are looking forward to enjoying hot spinning actions packed with rewarding bonuses and great payouts which come more often than you december expect. In terms of its design, Hotline is definitely yet another NetEnt visual and audio masterpiece which will not disappoint even those most demanding players as everything is set as it is supposed to be, from the game’s visuals to its truly catchy 80’s soundtrack.