Da Vinci Diamonds is definitely one of the most popular IGT releases and this is not surprising considering the fact that the game comes packed with truly rewarding bonus features, awesome payouts and an appealing design which when combined with other game’s elements make this game definitely worth a shot. This remarkable IGT game comes packed with 5 reels, 20 paylines and plenty of winning opportunities you get to explore as soon as you hop on an exciting virtual journey with this art-themed game. As the game’s name suggests, Da Vinci Diamonds is paying a tribute to one of the most prominent names in the history of arts, Leonardo Da Vinci. 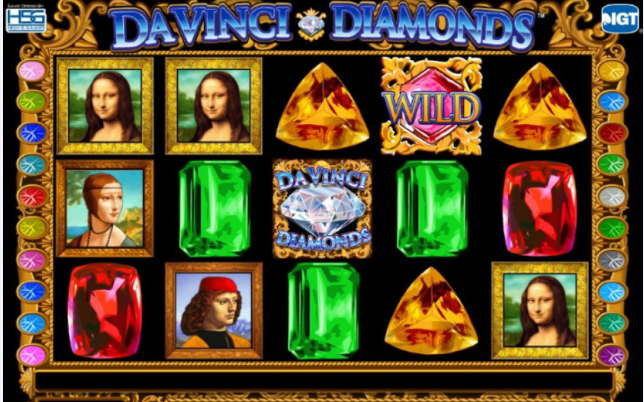 Therefore, with the very first spin of the Da Vinci Diamonds reels, you will come across neatly crafted symbols depicting some of the best Leonardo’s portraits in addition to sparkly diamonds which keep dancing on the reels during the gameplay. The game is also packed with an interesting Cascading Reels system which can bring awesome, consecutive winnings your way. When it comes to the game’s design, you will not be disappointed either. The game’s reels are neatly framed by an interesting ornate picture set against a plain, black backdrop which accentuates the game’s colorful symbols. With these amazing elements of the Da Vinci Diamonds game, this IGT release will definitely appeal to those players who like the work of Leonardo and there is plenty of them for sure. 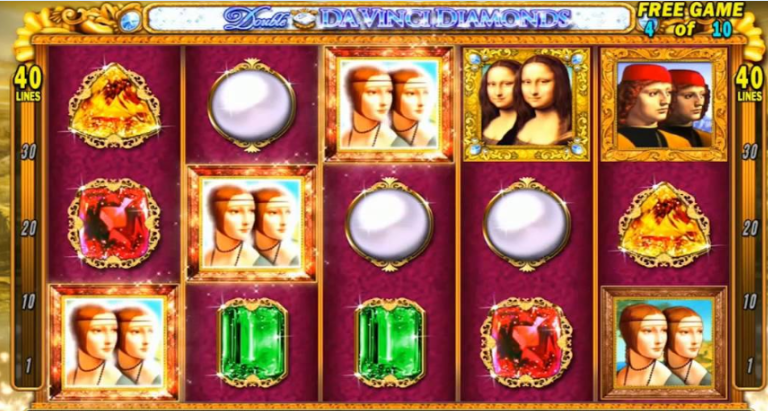 The Da Vinci Diamonds is definitely one of those highly appealing, very interesting games bringing the best out of Renaissance directly to your home. The game used to rule land-based casino industry and since its introduction to the online casino industry, it does the same attracting those players who appreciate all of the work done by this Italian genius. The Renaissance is definitely one of the most important periods in overall human history and alongside Michelangelo and several other names, Leonardo Da Vinci is definitely the most influential artists of this time, so there is no wonder why IGT was inspired by his state of artwork he produced over the years. If one person deserved to be immortalized in this way, it is Leonardo, who was not only an artist but also a philosopher, an inventor, and a doctor. 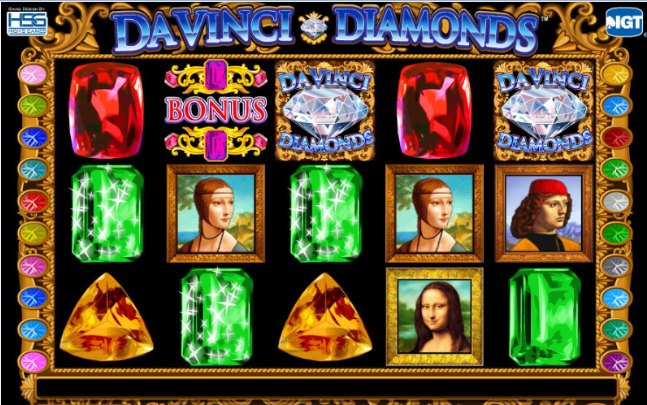 The game’s developer definitely did an amazing job with their Da Vinci Diamonds game packing great graphical solutions, appealing visuals and remarkable animations into the game offering a truly immersive online gaming experience to every player who decides to explore some of the best Leonardo’s work with this game. Everything in the game is presented in a unique and interesting way, so there is no wonder why this game survived many years at the very top managing to keep its players around thanks to its great mobile version, smooth animations and of course rewarding bonuses and payouts which attract its players the most. 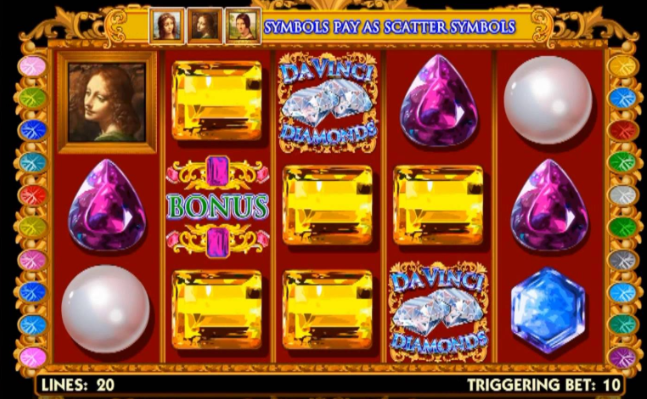 During your Da Vinci Diamonds gameplay, you will enjoy miniature versions of Leonardo’s famous paintings which definitely match perfectly other symbols in the game depicted as colorful diamonds. During your Da Vinci Diamonds gameplay, you definitely should pay attention to the game’s Wild symbol represented by the Pink Diamond which has a power of replacing for other symbols on the reels helping you score more winnings combos. As already mentioned, the game uses a special Tumbling Reels system meaning that symbols drop from the top rather than spinning within the reels. This means that when you score a winning combo, those winning symbols disappear to be replaced by new dropping symbols which can bring countless winnings your way.

The game is also packed with a Bonus symbol which is your key to triggering the game’s Free Spins mode. In order to activate this mode, you have to land three or more of these Bonus symbols on reels one, two and three. Once you get there, you are immediately awarded 6 Free Spins. Moreover, if you manage to land more of these symbols, you december get up to 15 Free Spins. Since this mode can be re-triggered, you december enjoy getting up to 300 Free Spins in one gaming session. It should be noted that the game offers a nice 5.000-coin jackpot you get as soon as you land five of the game’s Da Vinci Diamond symbols on the reels.

This IGT release is one of those truly classical games packed with a true elegance and beauty which is clearly visible in every single aspect of the game, from its beautifully crafted symbols to its nice and plain background. This is one of the most played games both at land-based casino venues and at online casino venues, and considering its rewarding bonuses and awesome cash prizes, this comes as no surprise. If enjoying stunning Leonardo’s art in this way sounds good to you, head to an IGT-powered venue and take it from there.